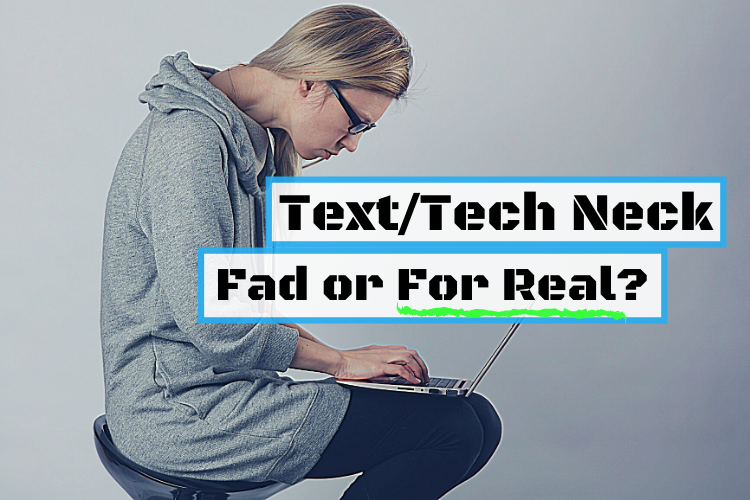 Text Neck – Fad or For Real?

Text neck, or tech neck, is a term that seems to be commonly tossed around nowadays.  So what exactly does it mean?  Put simply, it refers to the poor postures and positions that we put ourselves in when using our electronic devices.  I don’t think anybody will argue with the increasing trend of technology in our society.

Flexed posture involves excessive forward head positioning, slouched shoulders, and a rounded spine (especially the upper back).  These characteristics typically result in a common term in the rehab and fitness world, upper cross syndrome.  The reason this posture is such a problem is not because it looks unappealing, but because of the ramifications it has on the musculoskeletal system.  Our body was designed for a specific reason, movement.  Continued slouching, regardless of cell phone use, ultimately causes restrictions in our spine and adaptive changes within our muscles.   We often find that certain muscles become adaptively tight and/or inhibited.  This is obviously an over simplification but the basic principles are fairly consistent when evaluating people who work jobs based around technology.  Not to mention, these postural characteristics seem to be more prevalent in our younger populations.  All in all, prolonged poor posture when using technology has contributed to us becoming an imbalanced mess resulting in neck pain, low back pain, and headaches.

So what can you do for text neck?

As society continues to rely on technology, and technology continues to be at our finger tips, I believe that the ramifications of text neck and poor posture will increase.  Just look around!  Human beings, once thought of as social animals, sit in groups amongst each other staring at their digitized screens in silence.  To make matters worse, text neck and poor posture is not limited to cell phone use.   Computers, tablets, and even driving a car are all perpetuators of poor posture.  The uses of these devices seem to have one thing in common, flexed postures.